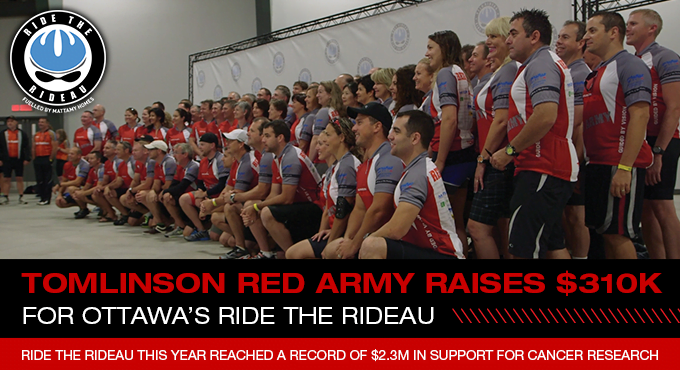 The fifth annual Ride the Rideau was again a well attended Red Army event, with the Tomlinson team of riders and volunteers surpassing its $200K goal and raising than more than $310K for cancer research. On September 6, Tomlinson’s 133 Red Army riders joined more than 900 cyclists at the start of the event.

Unfortunately, the event was cancelled given a tragic accident which resulted in the death of one of the cyclists for which, the Tomlinson family and employees extend their deepest condolences and sympathy to the family and friends of Laurie Strano.

This marks the Red Army’s second year of participation with a growing team and having raised almost a half a million dollars in just two years for the cause. Ride the Rideau this year reached a record of $2.3M in support for cancer research for The Ottawa Hospital, making it Eastern Ontario’s most successful single-day cancer fundraiser.