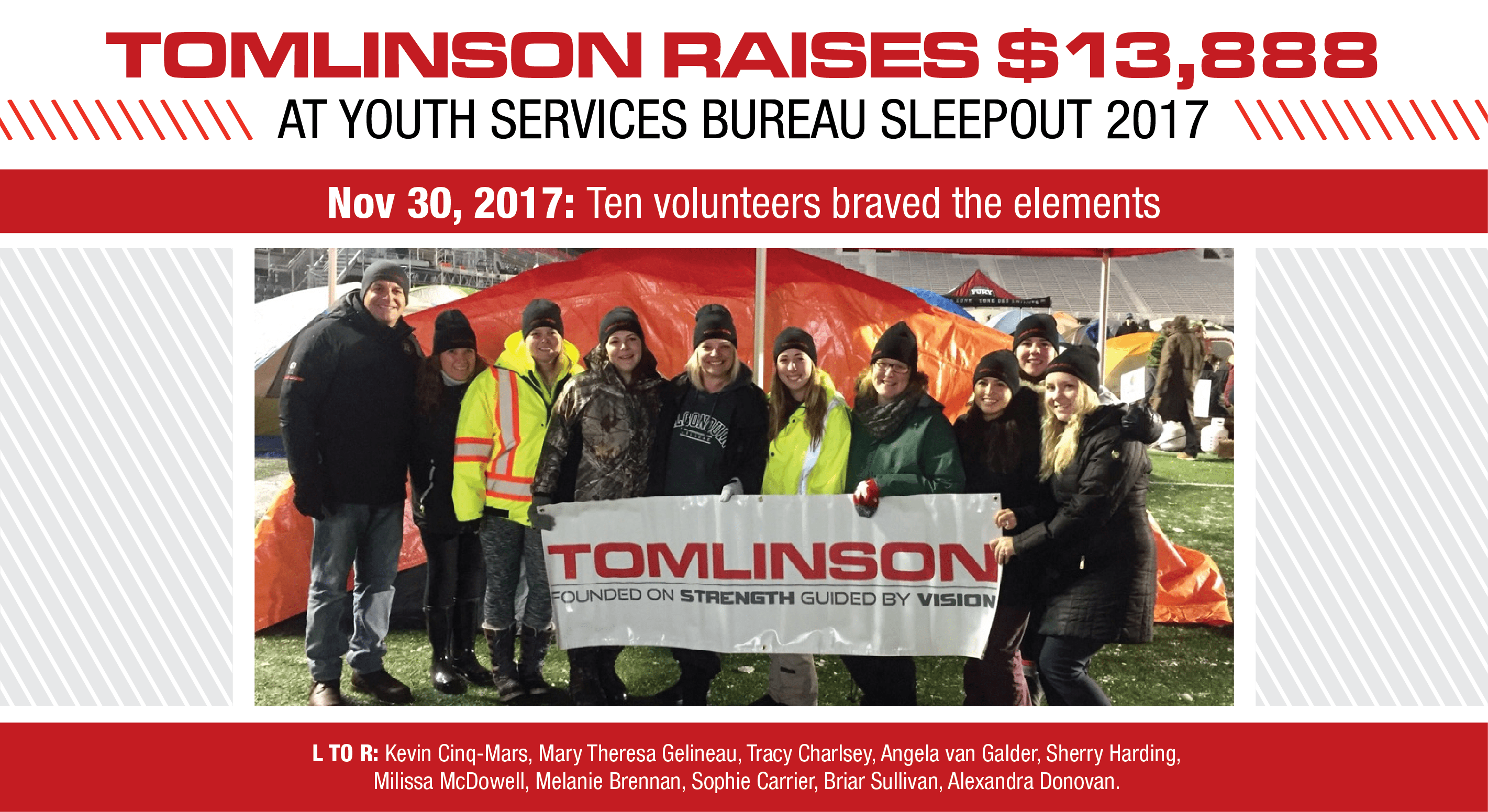 OTTAWA – December 11, 2017 – On Nov 30, 2017, a dedicated team of ten Tomlinson employees braved the elements and spent the whole night outdoors at The Stadium at TD Place, Ottawa. The reason? The annual Youth Services Bureau of Ottawa’s SleepOUT for Youth. The Tomlinson team was the second highest performing group, raising $13,888 towards the YSB’s total of nearly $240,000. The proceeds will go towards providing critical housing solutions for homeless youth, as well as programs to reduce youth homelessness in Ottawa. “Thank you to everyone from Tomlinson who participated in and donated to this year’s YSB SleepOUT,” said team captain Angela van Galder, Tomlinson Environmental Services Ltd. “This is just one example of the generosity of all our employees. Because of the team’s dedication and with a generous donation from the Tomlinson Family Foundation, we were able to raise an incredible $13,888! We are ecstatic! We are already discussing fundraising for 2018. We look forward to a larger team and to hopefully raising even more money.”

This year, the overnight event included performances by local musicians, a campfire, hot beverages, and a photo booth. It was concluded with a morning address by local community leaders. The initiative, in existence since 2012, was created to call attention to the realities faced by well over 1,000 young people who find themselves homeless in Ottawa each year. All funds raised go to support programs and services for homeless youth offered by YSB. Last year close to 600 people in Ottawa participated, raising more than $250,000. Since its introduction, SleepOUT has raised over $500,000 to end youth homelessness in Ottawa.

Ralph Tomlinson founded R.W. Tomlinson Cartage in 1952 with one single-axle dump truck. Incorporated in 1969, the company is now a leader in transportation infrastructure and environmental services throughout Eastern Canada. Providing a comprehensive range of products and services in quarrying, construction, trucking and environmental industries, Tomlinson delivers the highest standard of quality and value to its customers. Investment in its people, processes, resources and equipment has earned Tomlinson a reputation for excellence, integrity, innovation and teamwork.