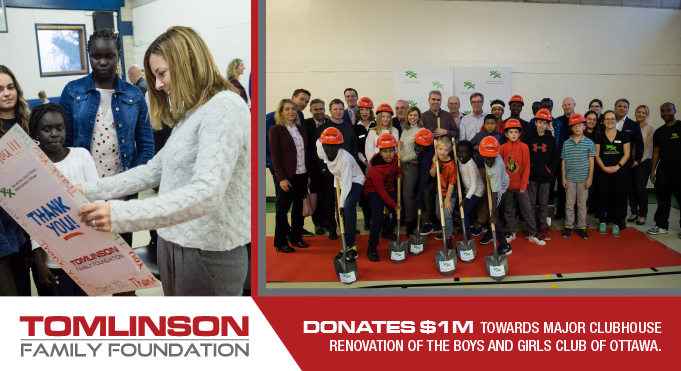 OTTAWA – The Tomlinson Family Foundation and the Boys and Girls Club of Ottawa broke ground on Monday October 30, 2017 to begin major renovations to the Clubhouse on Prince of Wales Drive, Ottawa. The $3.5 million renovation, bolstered by a $1 million donation from the Tomlinson Family Foundation, will allow the Club to accommodate more at-risk children and youth in the community.

“As a newly-formed foundation, the Tomlinson Family Foundation is excited about our first major gift. Our donation of $1 million to the Boys and Girls Club of Ottawa meets an objective of helping youth within our community,” says Cindy Tomlinson, Executive Vice President, R.W. Tomlinson Limited.

Once a fire hall, the 51-year-old building will be heavily renovated, doubling the Club’s footprint. A complete interior renovation and reconfiguration, plus the addition of a new gymnasium and washrooms inside and a new all-season rink outside, will enhance Club programming offered for free to neighbourhood children and youth.

“We are thrilled to be able to give back to an organization that our family benefited from years ago when my father, Bill Tomlinson and uncle, Ken Tomlinson, attended what was then the Boys Club on Nepean Street and summer camps at Mink Lake,” says Cindy Tomlinson. “As one of three children, with hardworking parents struggling to start their own business, my father was able to participate in programs and experiences that otherwise may not have been available to him. The Tomlinson Family Foundation appreciates that our community will always need organizations such as the Boys and Girls Club. We are proud to be partnering with them on the renewal of this facility and look forward to seeing it benefit Ottawa’s youth for years to come.”

“This Clubhouse is seeing such growth,” says Colleen Mooney, Executive Director, Boys and Girls Club of Ottawa. She says Club Members aged six to 18 years made nearly 20,000 visits to the location last year. “In this neighbourhood, 37 percent of youth under the age of 18 are living in low income. It’s critical that this Clubhouse is renovated as it will allow us to engage with more children and youth in the community through our after-school, weekend and summer programs.”