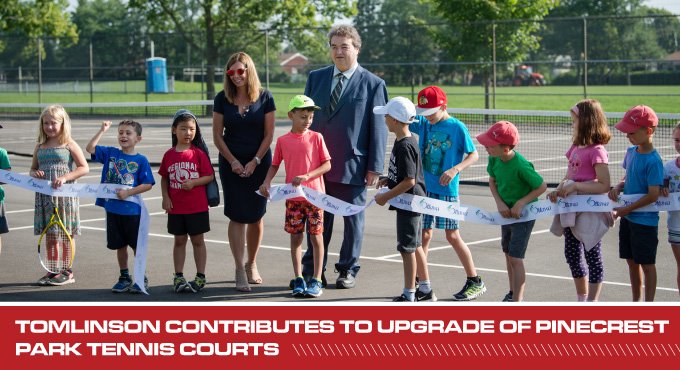 Ottawa, ON – On Monday August 20th, 2018, the City of Ottawa recognized Tomlinson’s charitable contribution to the refurbishment of Pinecrest Park Tennis Courts, at Pinecrest Park, 2240 Torquay Avenue. As part of its $1-million Tomlinson Parks Initiative, the construction company contributed to the upgrade of the tennis courts this year. Councillor Rick Chiarelli, College Ward, presided over the grand opening and invited Cindy Tomlinson, Executive Vice President, R.W. Tomlinson Limited to cut the ribbon. Children partaking in summer camp were also invited to attend the ceremony and were the first to play on the courts. A plaque on the fencing reads: “The revitalization of the tennis courts was made possible by a generous donation from the Tomlinson Family Foundation.”

The refurbishment of Pinecrest Park Tennis Courts is one of four locations in Ottawa to benefit from the Tomlinson Parks Initiative. Tomlinson has also donated its manpower and resources to complete upgrades at Gabriela Dabrowski Tennis Courts, Manor Park Tennis Courts, and Meadowbreeze Skating Rink in Kanata. Tomlinson has a long history of philanthropic contributions to local charities and involvement in different projects that enhance the Ottawa community. Launched in 2016, the initiative represents a commitment of $1M over five years towards park renewals and upgrades within the city. Tomlinson and the Tomlinson Parks Initiative are donating infrastructure services and construction materials to improve local parks.