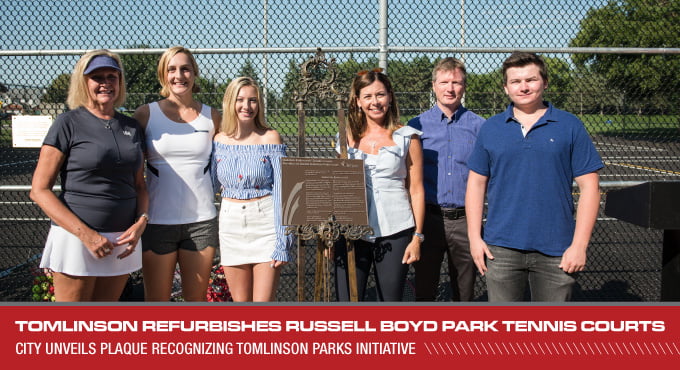 Ottawa, ON – On Monday August 13th, 2018 the City of Ottawa unveiled a plaque at the previously-named Russell Boyd Park tennis courts, recognizing the Tomlinson Parks Initiative for their donation towards the refurbishment of the courts. During the ceremony, the City renamed the courts in honour of Gabriela Dabrowski, the Ottawa-born winner of two Grand Slam doubles titles. These are the courts where she first played and were in much need of repair. While the city covered items such as technical drawings, the rest was contributed by the Tomlinson Parks Initiative. The upgrade is part of the Tomlinson Park’s Initiative’s five-year, $1-million community contribution to revitalize parks within the city.

The Gabriela Dabrowski Tennis Courts are the fourth location in Ottawa to benefit from the Tomlinson Parks Initiative. The refurbishment of Manor Park tennis courts was completed in June 2017, the Pinecrest Tennis Court in September 2017, and in 2016 Tomlinson built the Meadowbreeze Skating Rink in Kanata. Tomlinson has a long history of philanthropic contributions to local charities and involvement in different projects that enhance the Ottawa community. Launched in 2016, the initiative represents a commitment of $1M over five years towards park renewals and upgrades within the city. Tomlinson and the Tomlinson Parks Initiative are donating infrastructure services and construction materials to improve local parks.
—