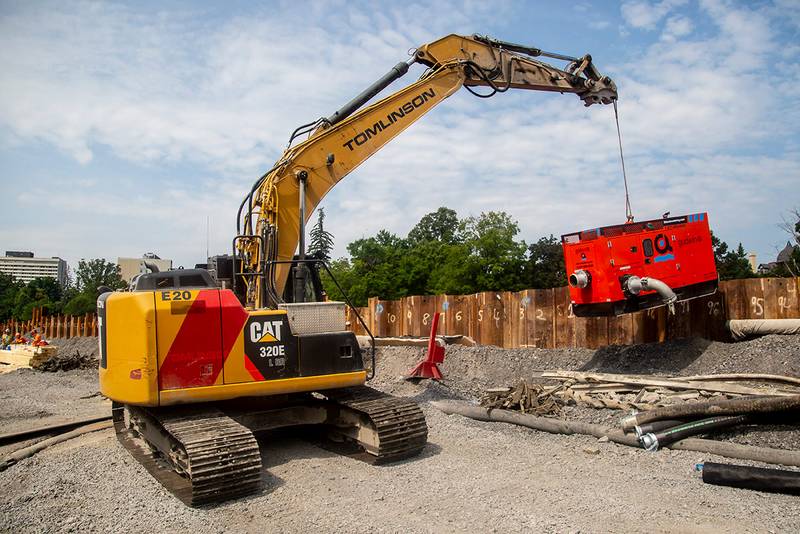 Tomlinson, leaders in Transportation Infrastructure, has been fulfilling multiple Construction and Watermain projects in the City of Ottawa and surrounding areas during the 2019 construction season.

Tomlinson has been working with Robinson Consultants to complete a large sewer reconstruction on Bronson Avenue, a major artery in the City of Ottawa. The project included a full reconstruction of a 900mm combination sewer from Arlington through to Imperial Avenue by Drummond’s Gas, as well as a 914mm high pressure watermain. The company subcontracted Marathon Drilling to perform a 200 m micro tunnel through rock, which was a first for any construction project in Ottawa. Crews worked around the clock, every day of the week–with the exception of Sunday— this approach reduced traffic interference on Bronson while maintaining the on/off ramps to the 417. With a start date of May 2019 and an end date of December 2019, the project required a great deal of planning and coordination between the city, subcontractors and pedestrian/vehicle traffic to meet the aggressive timeline. Tomlinson also replaced the 400mm local watermain throughout the project to improve a failing section of infrastructure. 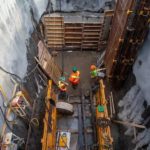 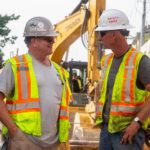 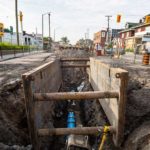 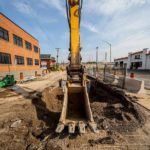 Elsewhere near downtown Ottawa, Tomlinson has been fulfilling a contract with Parks Canada to replace a section of the Canal wall. Preparation is fundamental for this construction site due to the high-profile setting, downtown constraints, poor soil quality, and lack of area access. Tomlinson crews installed shoring along the entire length of the project to protect and maintain the boulevard and Colonel By Drive. With both the shoring and cofferdam installation, Tomlinson was continually pumping water—at one point running five 6 inch, and one 8 inch, pumps. During the demolition of the existing wall, crews discovered two old railway ties in the bottom of the mass concrete wall that acted as a footing. 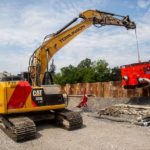 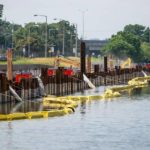 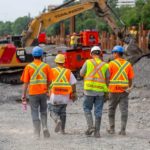 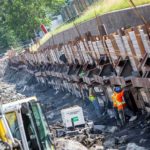 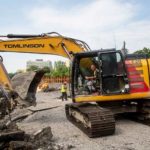 At the same time, Tomlinson has been busy removing and replacing bridges for Ministry of Transportation of Ontario. The Bainsville Project involved the complete removal and replacement of the 2nd Line Road bridge over HWY 401 within a specific time period, following replacement of the 3rd Line Road overpass in 2018. The bridge was comprised of prestressed concrete NU girders. The road embankments were constructed with lightweight fill (Expanded Polystyrene blocks) to reduce the amount of settlement over time. Polystyrene blocks are highly resistant to temperature changes making them ideal for embankment construction, as well as road insulation. 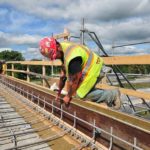 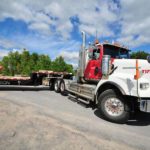 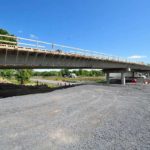 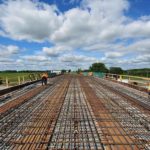 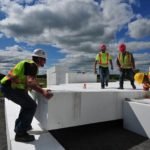 The second bridge project is the Raisin River Project on HWY 401 in Lancaster, Ontario. This is a four year project consisting of Grading, Drainage, Granular base, Hot Mix paving, and Electrical. It also includes the removal and reconstruction of the east and west bound twin bridges at Raisin River, the County road 2/34 Bridge/Underpass, and the rehabilitation of a Box Culvert on HWY 401 at Finney Creek. The existing two-lane bridge at County Road 2/34 spans over a four-lane section of HWY 401 and consists of two span cast in place concrete box girders with abutments and central pier founded on piles. Tomlinson has been working diligently, completing Highway 401 Median Crossovers, where traffic will be diverted in upcoming construction seasons.
Prior to construction, and as part of the replacement of the existing underpass, new embankments are being constructed adjacent to the existing underpass and will be completed under a design build aspect of the project in the Year 1 construction season. The design will consist of ground improvements, including the installation of a combination of controlled modulus columns and wick drains, providing partial replacement and/or displacement of the soft soils at the site below the embankment. Performance of the new constructed embankments will be monitored using geotechnical instrumentation, with data collected throughout the completion of the construction and for approximately 36 months following the opening of the bridge to traffic. 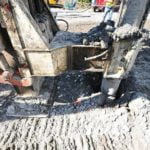 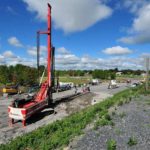 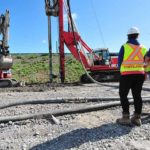 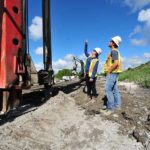