Ottawa ON – At an official ceremony held on Friday, December 4, 2015 to open the Adàwe Crossing, Mayor Jim Watson congratulated Tomlinson for their contribution in the construction of the new pedestrian bridge. Tomlinson was instrumental in the planning and construction of the new landmark that links Donald Street and Somerset Street East and provides pedestrians and cyclists easy access to the communities, amenities and employment located on either side of the Rideau River. Working with the City and the Rideau Tennis Club as well as engineering partner, Stantec, Tomlinson ensured Adàwe Crossing met the City’s needs and was completed ahead of schedule. “Today’s bridge opening, which is ahead of schedule and on budget, is a testament to the hard work of all those involved in the project, including the City of Ottawa, the Stantec team and of course, Tomlinson. It has been a very successful project overall,” said Jack Lay, Project Manager, Stantec.

Started in July 2014, the project was completed on budget and 6 months ahead of schedule despite the challenges of working in the water. In just 16 months Tomlinson installed three metal spans across the river from the east side in Overbrook to the Sandy Hill shoreline on the west side. The spans are supported by two mid-river piers which were erected in late 2014. In 2015 the bridge’s travel surface was completed, including the deck, railings and lighting, and the new connections to the multi-use pathways. The team came up with the innovative idea of producing several concrete trial batches in order to address any issues before the final construction of the bridge. This meant that the bridge was out of the water in a very short period of time.

“We were delighted to be able to complete this project for our community ahead of time. Thanks to high standards of quality, excellent team work and engineering innovation, we have been able to construct a beautiful bridge without any problems,” said Mike McGregor, Operations Manager, Structures, Tomlinson.

Wayne Newell, P. Eng, General Manager, Infrastructure Services for the City of Ottawa spoke highly of Tomlinson’s contributions, “This is a complete team effort working with Tomlinson. The $9.2 million dollar project has gone extremely well. Tomlinson has done great work on this project, as they have done on many projects for the city over the years. It is important for the city and our partners to show we can deliver, and in working with Tomlinson we were able to do so.”

Present at the well-attended ribbon cutting event held this past Friday were Mayor Jim Watson and councillors from the Rideau Rockcliffe and Rideau Vanier Wards, who praised all of the teams involved in the Crossing’s construction.

“We were delighted with Tomlinson’s work on this important landmark. It provides a much needed connection between Overbrook and Vanier with Sandy Hill and the University of Ottawa and gives nearby residents, better access to downtown. The bridge also improves safety as it eliminates the need for cyclists to go through the Strathcona Park parking lot. This is another municipal project that helps transform Ottawa into a more walking and cycling-friendly city,” said Mathieu Fleury, Councillor Rideau-Vanier Ward.

The name Adàwe is the Algonquin term meaning “to trade” and is symbolic of the history of the Rideau River, the aboriginal heritage of the area and the bridge’s ability to link the communities on either side.

To read the original news release from the City of Ottawa: click here. 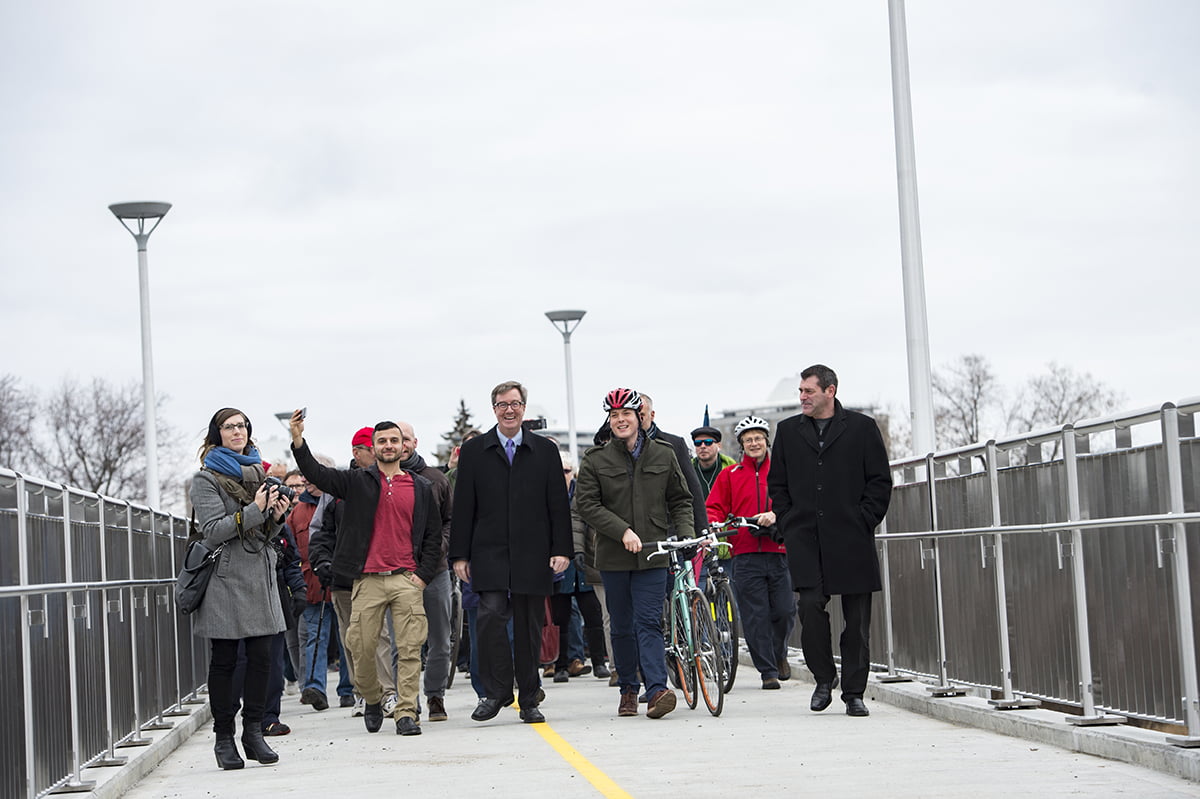 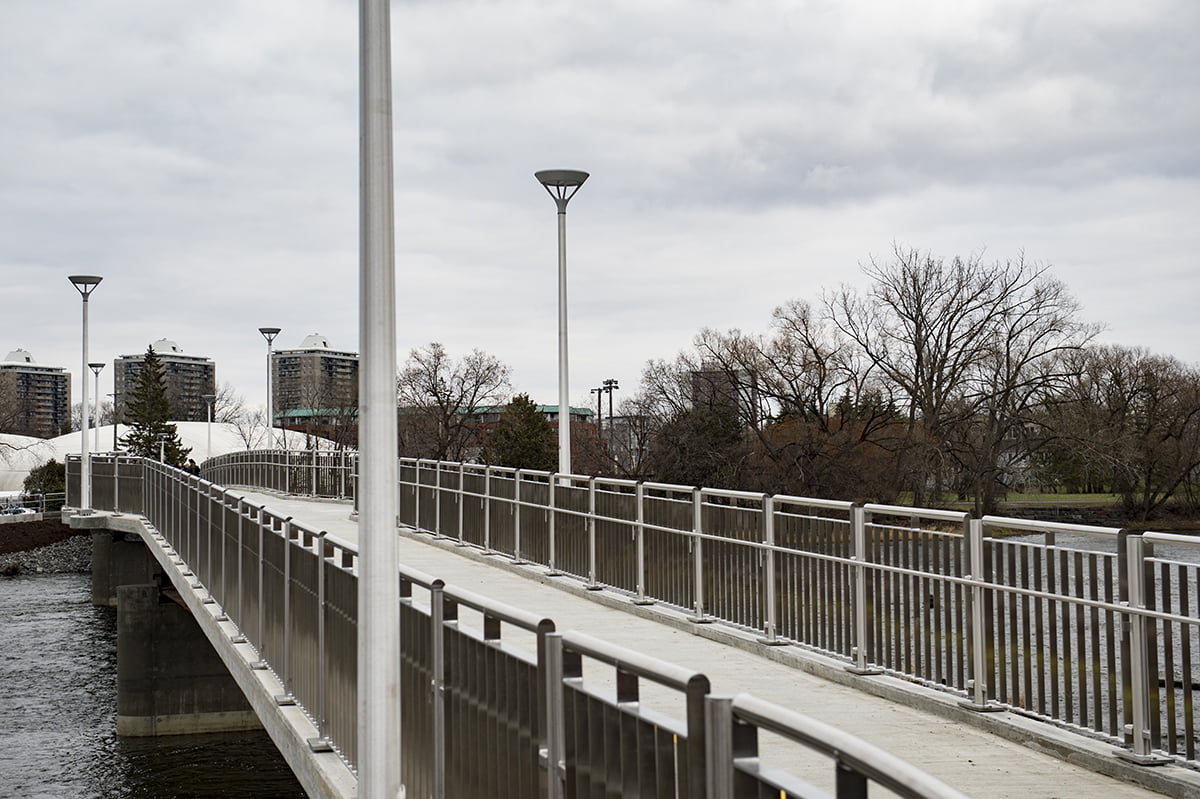 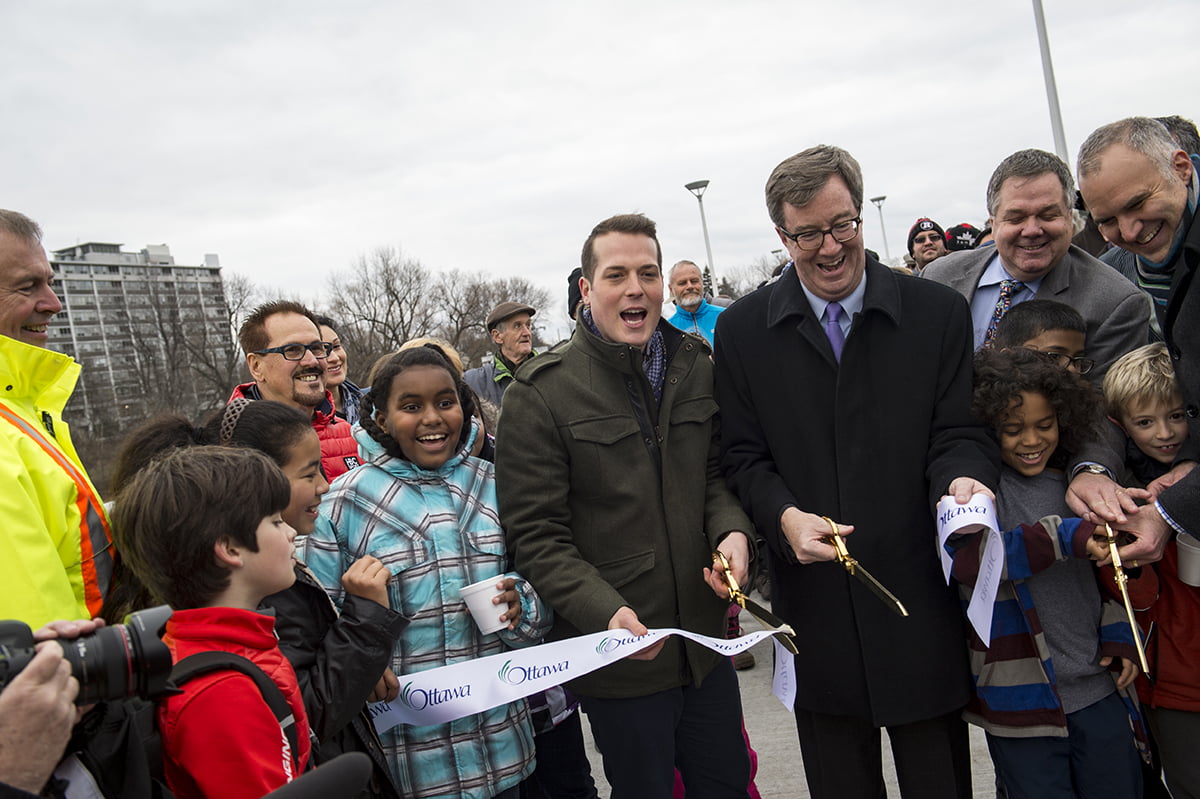